Tutorial 5: Process of the Comic Strip

What is a tutorial?  It’s an educational tool that helps with the performance of your work.  Tutorials are EVERYWHERE, and I like to tease and say, “Tutorials tell you how to do things, I’m going to show you how NOT to do them!”  But, it’s a joke.  The information I have to impart can be helpful; but, what I want you to do is take the ideas and use them in your style, and create your own way of doing things.  That is how you’ll excel in what you want to do!

Well, a while back, we covered the first step to creating a comic strip; or, any creative work, really.  That first step is creating the idea.

In short, ideas that I have come from a play on words, conversations with others, conversations I overhear, doodles of the characters, playing with my action figure collectibles, improving with the puppets, inspiration from reading books or other works that lead my ideas in a new direction.  Or, sometimes it happens to be a play on an idea.  So, let’s look at the idea of “one foot in the grave.”  In this case, I wanted to do something similar to the old adage; but, realized it didn’t work using the character of me or one of the critters like Muley or Buford.  Instead, I decided to doodle an old man character in my sketchbook. 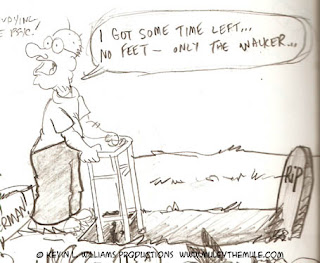 It’s pretty funny to me.  Yet, I didn’t want to just go with any ol’ old man, so I decided to use the character of Papa Roy, which I think he would approve.  Now, we’re getting somewhere.  But where?  I have a single panel page in front of me, but no layout yet.  The sketchbook drawing lends itself to a layout; but, it isn’t complete.  I need to do some planning.
The plan of any comic strip is that you want to leave the reader with something to think about or a joke to laugh at.  I have to consider the illustration in the sketchbook and figure where do I put the headstone, the grave, the subject speaking and the word bubble to gain the best effect for the reader to gain a laugh?  So, out come the thumbnails: 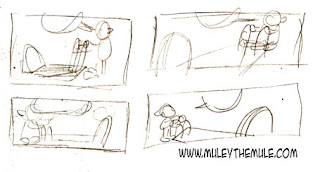 From these thumbnail drawings, I get a better sense of what I think will be the funnier layout and give the bigger bang for the reader’s non-dollar.  The toughest part of the thumbnails process is you have to decide what will be the best layout for the enjoyment of your audience and what you think will work best for your joke.  And next is the pencil work.  Now, I think I’ll leave out the process of using pencils because I think that would make a great future tutorial.  In the meantime, I have taken my preferred thumbnail and transferred that to a single panel strip.
Your next part of the project will be inking.  We’ve covered that in a prior tutorial.  If you haven’t read it yet, you should.  Lots of great suggestions for lots of different ways to ink.

Well, what do you do now?  The next part of the process is scanning.  Because I’m cheap and have an 8.5x11” scanner, I have to scan the strip at one end, then at the other end and then piece the two together.  You have to be careful to be sure that you overlap properly and get rid of any blurry lines in the connection (when you do this, you’ll understand what I mean).  I scan my images in at 300 DPI (dots per inch) and save the art as a high resolution .jpg file, then I “Save Image As” and there I have it.
I also won’t get into the next process part of coloring in CMYK, and saving as an RGB file at 72 dpi for publishing on the ‘net because, again, those will need to be future tutorials.  In the meantime, you’ve got a pretty good grasp on the process of creating a comic strip and the work that goes into it, and I’ve now also saved you a few minutes of reading about the next few hours’ worth of work colorizing the thing.

Hopefully now you’ll be inspired to get out there and create your own comic strip!  So, what are you waiting for? Get t’creatin’!
You can see MORE Muley the Mule and Friends' Comix and Stories at his website by clicking here.
Posted by MAW Productions at 9:15 PM