By Martheus Wade
There are a lot of different ways to compose a pin-up. I'm going to take you step by step through my process to give you a little insight on how I do it. As always, these steps are for you to take what works and use it on your quest for artistic greatness.

The first thing I want to tell you right off the bat is that, I think way too much about creating a pin-up that is a little smarter than you would expect. Most of the time, I'm asked to illustrate one of the many beautiful women of comics as commissioned work. To make the illustration smart strengthens the composition and appeal of the piece. It also helps to contain some of the risque innuendo that a more sexual piece may have. In the case of the illustration that I am about to show you, there is a tongue-n-cheek subject that was fun to play around with. So, here we go.

We all know the Copper Tone Girl. 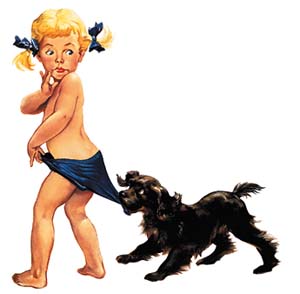 The commissioner wanted to depict this scene but with Power Girl and Krypto in place of the Copper Tone Girl and her puppy. I really liked the idea and it helped me get an instant visual in my head of what I wanted to draw. This is a really good thing. Most of the time, I have to start an illustration with a series of thumb nails that depict the subject in a variety of poses. From there, I select one pose that I like and begin to sketch a little tighter on the full 11x17 Bristol Board. Since the initial idea was so strong, it allowed me to skip the thumbnails all together and go straight to the Bristol. 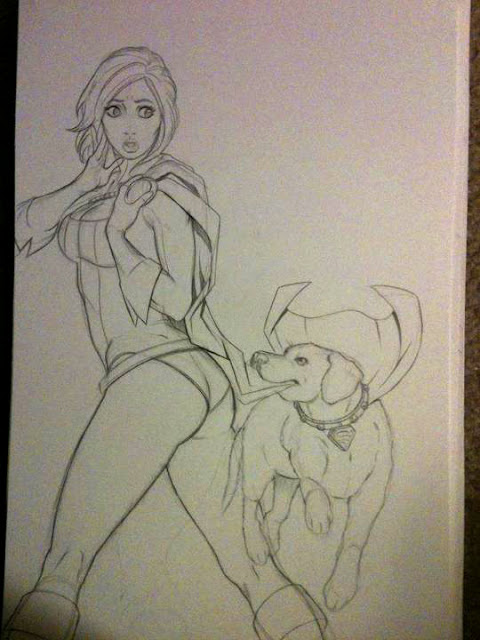 Most of the time, I like to sketch in blue line pencil first. Then sketch on top of that.  Working with Blue like pencil allows me to sketch very messy with minimal clean up. This also allows my pencils in the end to be crisper. Sketching is used to work your illustration and composition without worrying about detail. I will go on record of saying that sketching is the most important part of pin-up illustration. It keeps you from making mistakes on the front end and helps you to consolidate your ideas into one strong idea. If you could see into my head, you would find out how cluttered with unorganized ideas my mind is. Sketching helps me to organize. 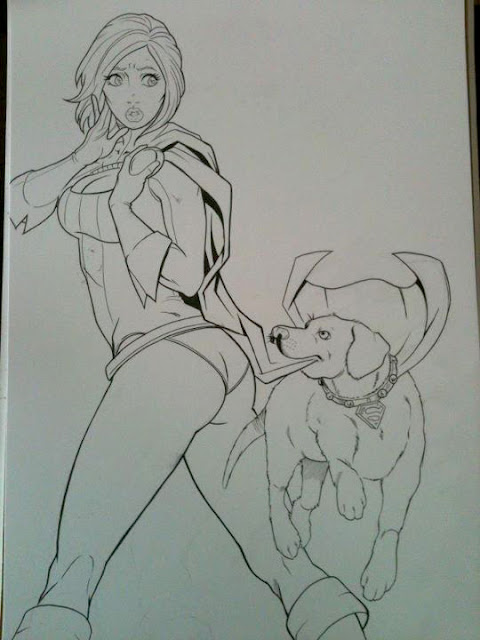 After the composition is correct and the pencils are laid in, I begin the inking process. Great pencils can be destroyed by horrible inks. Be very careful to consider line weights and character placement in your inking. Please refer to Tutorial 2: Inking for different tips and tricks. After the inking is completed, I erase all stray pencil lines and lay in the deep shade. This comes in handy when I am about to copic or color an illustration as it shows where my light source is. This is also where the drawing comes to life and begins to be solidified. This Power Girl and Krypto illustration is a very cute and playful. But because of the idea of Power Girl being an attractive and voluptuous woman, it is easy to stray into a sexual nature. That is a fine line that is hard to walk. What I like to keep in mind is to make sure the illustration depicts a strong confidence in the female character whatever the subject is. Here, even though Power Girl is taken by surprise, she's still not helpless. Just a little embarrassed. Those are the ideas that will move the illustration from being a pin-up to an illustration that speaks. 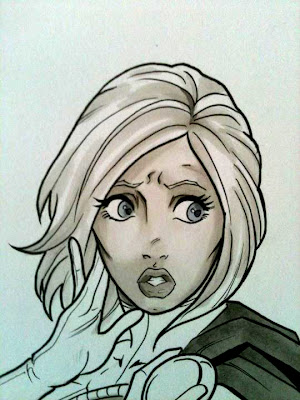 After I have made sure of my composition and fleshed it out, it's time for some copic markers. I love copics. If you have not tried them in your work, I highly recommend them. However, they are pricey. I got into marker illustration in college where we had marker comping classes. The class forced me to work quickly in order to get fine blends of color. Copic markers are a little more forgiving. But the idea is the same. My choice of Copic are the warm, cool, and neutral grey sets. I use these greys as if I'm laying in color. A warmer "color" constitutes the use of a warm grey. A cooler "color" constitutes the use of a cool grey. The result is a piece with the tonality of color. Sometimes, you can even fool the eye into thinking you just laid in a color. Here I used warm greys 0 - 3 for Power Girls face, lips and hair. I used warm grey 5 for her cape and cool grey 3 - 5 for her eyes. I'll be doing a copic tutorial soon. So, be on the lookout for that for much more detail in this technique. 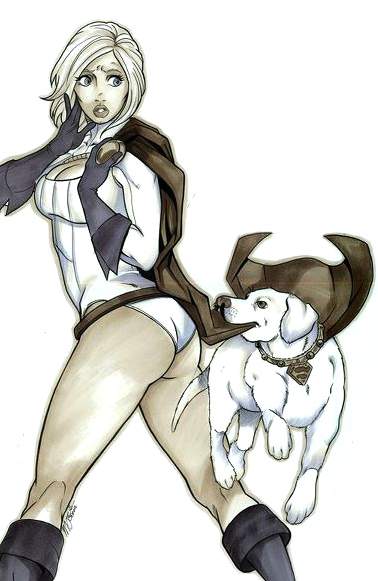 I continued the juggling of the greys throughout the piece. Power Girls white jump suit and Krypto's fur where fun to work on. I used cool greys in multitude on those areas in order to really render the twisting and turning of the bodies in the space given. At this point, I thought I was finished. But, I soon remembered a critical piece of information that I left out of the illustration. 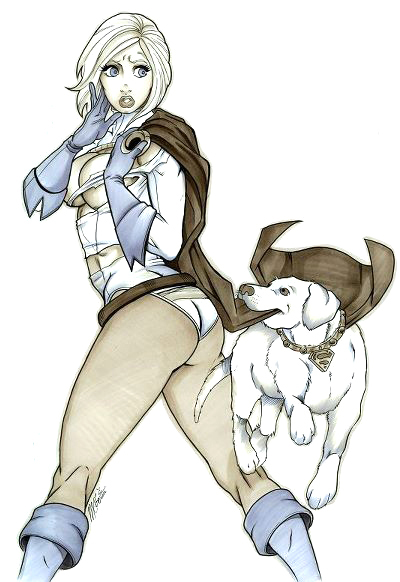 The commissioner wanted Power Girls clothes to be coming off much like the original Copper Tone Girl illustration. So, I had to figure out how to do it. I showed this first version to the commissioner and, while he liked it, he really wanted to go more in his original direction. So, for me, it was kind of back to square one. I pitched to him that Power Girls clothes had to be torn off because of the way her suit is made. He agreed and I went back and drew in the rips into the costume. This also allowed me to fix some of the things that bugged me in the original illustration. Now Power Girls arm didn't get cut off. As well, I went with lighter greys on her boots and  gloves which brought out her eyes more. Because of the rips revealing more skin, I changed her expression slightly. Now she is a bit angry as well as embarrassed. No matter what, Power Girl is still in control of this illustration. This version was excepted with flying colors. So now... On To Colors! 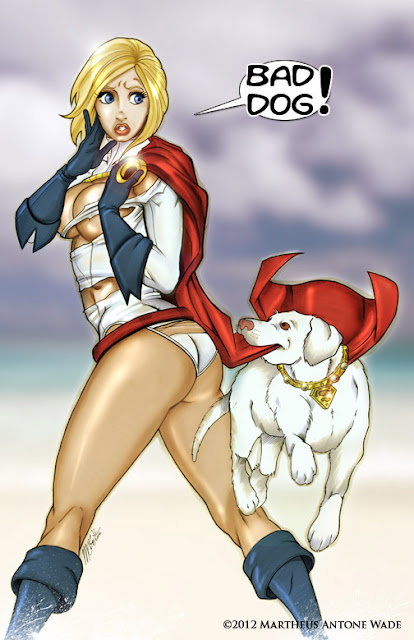 Here is the final colorized piece. Most of the time, I skip the copic illustration part and go from inks straight to colors. This time, I included the copic tones into my colors. This allowed me to keep the same tonality that I had before as well as give a painterly quality to the finished piece. I used photoshop to color this and place my soft beach background in. I made selections of like tones and changed the color in photoshop with Hue and Saturation in order to keep the marker strokes of the copic illustration. Then, I painted over the new color selections. We will be doing an entire section on using photoshop and illustrator to color so look for those tutorials in the near future. Again, I stepped back and found I wanted to continue to push the fact that Power Girl was still in control. So, I added the text "Bad Dog!" to the finished piece.

And there you have it! A finished piece from beginning to end. Hope you enjoyed the tutorial and the illustration. What are your ways to illustrate a Pin-up? What do you like to include and take out? We want to hear from you. You can reach us here or on our MAW Productions Facebook Page! So, let's talk!


Posted by MAW Productions at 2:25 PM