By Kevin Williams and Martheus Wade

One of the questions we get asked from time-to-time is, "Where do you get your ideas?"

Kevin:
Well, sometimes from reading.  It can be a book about creating ideas, like "The Cartoonist's Muse"; or, it can happen while you're reading a novel.  Sometimes, reading other comic strips will send my brain reeling down another path and then I have to stop and go write a few comic strips.


Martheus:
I'm a big fan of movies. I find a lot of inspiration in going to a great movie (and some of the not so great ones) and falling into the story. Sometimes an idea for a comic story can come to me from something as simple as a camera angle. I remember going to see 300 and being moved so much by the fight scenes that I was determined to achieve that feeling of camera angles and movement in a Jetta comic page. 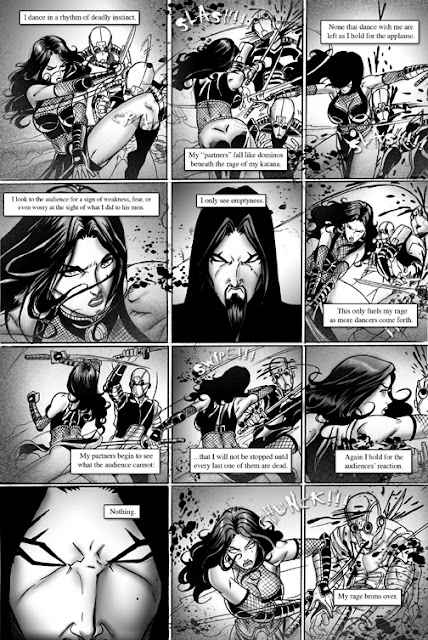 Janet:
I get a lot of ideas from movies and animation as well.  If there's a good storyline going, you can't help but become inspired. Good stories are timeless and transcend boundaries, so you'll see recurring themes in different books and movies.  Music can also put you in a certain mood to create.

Kevin:
Other times, it's an idea that stems from a conversation with a friend, eavesdropping on the conversation at the next table, or from a story that a friend tells you from their life.  I can say that sometimes ideas come from just doodling Muley and the other critters--when I draw them a certain way, wearing a certain costume...they tell ME what they want to do, and I do it.

Martheus:
People tend to think that last point is crazy talk. If you know your characters well enough, they will let you know what the story or next plot point needs. Sometimes that's all you need to get an idea rolling. For me animation is another huge inspiration. Everything from the anime Ninja Scroll to Wolf's Rain or High School of the Dead is a place for me to get hyped to create. And it's not just anime that stokes the creative fires. One weekend, Janet and I sat and watched all of the Justice League and Justice League Unlimited cartoon series. We drew the entire time and was glued to our seats! 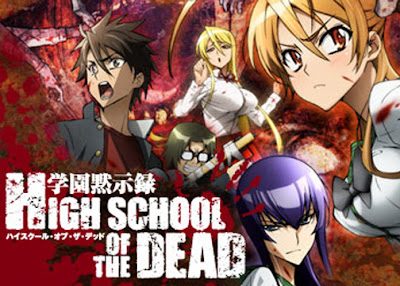 Kevin:
And, in some cases, the area around you creates the idea.  A while back we went to the Nashville Horror Con, followed by dinner at the Tilted Kilt.  While there, and with nothing much to look at *wink, wink*... 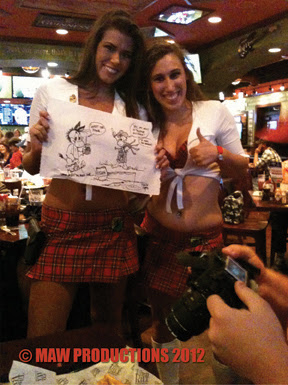 I found a clear paper placemat in front of me, so I whipped out my Sharpee and went to doodling.  I left the original art there on the table for our waitress; but, I took a photo of the idea I had. 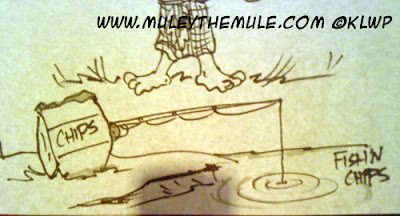 You see, it's an Irish pub.  And the specialty?  Fish and chips.  Everyone ordered "Fish-n-chips," which sounded like "fishin' chips."  That's where the doodle came from and where this strip originated.

Janet:
I know that my most creative/productive times occur when I'm around other creative people.  Don't know what it is exactly, but the group gets this vibe going, kind of a creative synergy that everyone contributes to and feeds off of.  Before you know it, you've spent 8 hours sitting in one spot drawing, laughing, talking, sharing ideas.  These are, in my opinion, the best times to create.
So, you see, the ideas can come from anywhere.  Reach out for them, snag them, and be sure to jot them down quick because as fast as the ideas come they will leave your mind.

Until then, keep the pencils, pens, markers and ideas MOVING!! 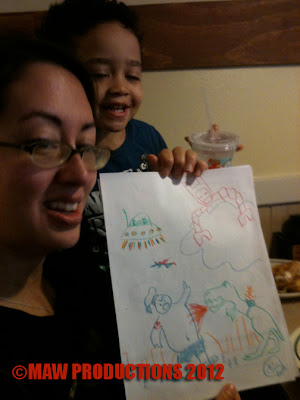 Posted by MAW Productions at 7:49 AM