Yeah, so seein as my brotha from anotha motha, Martheus Wade, is outta town doin his comic book thing, I'm doin him a solid by posting a review.

This past weekend I had some down time between my disco swingers club meeting and baking donuts (at especiallydonust4u.com, baby!), so I decided to do a little recreational reading, because you know I’m an educated gentleman and whatsnot.  I picked up a book by a brotha named Grimm or sumthin.  Well, lemme tell ya, this guy Grimm was all over the place.  I mean, he couldn’t stick to a single friggin storyline.  Everything kept changing from chapter to chapter!  How this guy even got published while my “1001 Ways to Pick Up Chicks with Donuts” was overlooked is beyond me.

I was about to chuck the whole thing in the trash when I finally came to “The Juniper Tree” chapter.  Boy, that one was a doosy!  It had murder, murder cover ups, pinning murders on little girls to take the fall, cannibalism, and sweet revenge all in it.  It was like some kind of friggin mob story, I tell ya!  The only thing missing was like maybe the brotha Grimm could’ve wrote in a hot, steamy sex scene or sumthin, ya know?

Anyway, “The Juniper Tree”’s all about this guy who has a kid and his wife dies, so he marries another dame and has a kid by her too.  Now this dame is a gold-digger and hates the first kid because he’s not hers.  So she gets the kid to reach for an apple in this big chest, because even though she’s a gold-digger, I don’t think they have a fridge or whatevah because the guy obviously needs to take on a second job to afford one.  Well, when the kid reaches in the chest, the dame slams the lid down and friggin decapitates him!!!  I mean, I was totally taken by surprise with that one!  Then the dame panics and places the blame her own kid who does nothing the entire chapter but cry her friggin eyes out.  Then, get this now, to get rid of the body, the dame cooks the dead kid and feeds him to the guy!  I mean, what the hell?!!  Then there’s sumthin about burying bones under a juniper tree, hence the chapter title, right?  Sumthin else about a singing bird that squeels on the dame, yadda yadda. One good thing is the bird gets the guy a fancy medallion, kinda like the one I bought the other day at the corner gas station.  Yeah, chicks love those.  Then the bird drops a millstone, I think that’s the new line of Buick station wagons, on the dame and kills her.  Then the kid spits in the face of logic by coming back to life even after being decapitated, cooked, and eaten.  And the kid and the other kid and the guy all live happily ever after without the gold-digging dame.

So even though this book was confusing as hell, “The Juniper Tree” chapter saved it all.  I give it 3 outta 5 star-shaped donuts.  With sprinkles.  At especiallydonuts4u.com. 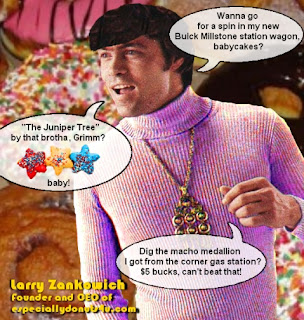 (A note from MAW Productions:  Mr. Zankowich is in no shape or form a part of MAW Productions.  His opinions are solely his own.  We also have no idea how he has our blog password.)

Posted by MAW Productions at 8:55 AM