Jetta: Tales of the Toshigawa - Issue 1 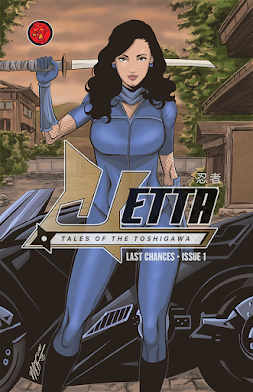 The Toshigawa Universe just got bigger. First published in 2004, Jetta: Tales of the Toshigawa - Last Chances marked the beginning of a long journey into comic book creation for Martheus and Janet Wade. Now, years later, we re-release this special book with brand new artwork, added story concepts, and new relationship building. This is the perfect glimpse into the future of Shinobi: Ninja Princess and a great gateway for new readers into a new world.

All pre-orders include an 8.5x11 exclusive print available while supplies last!

The Toshigawa clan has long guarded Japan from the shadows. Now, emperor of Japan, Terminus, wants to destroy the remaining members of the Toshigawa clan. The only person that can stop him is his daughter, Shianndrea! But before she can flee to America and continue her training, she has to deal with the formidable Desai and attempt to rescue her friend from his clutches.

Don’t miss this re-release of the first issue in the TOSHIGAWA SAGA. 32 pages of full color martial arts action. $4.99

Posted by MAW Productions at 5:08 PM No comments: